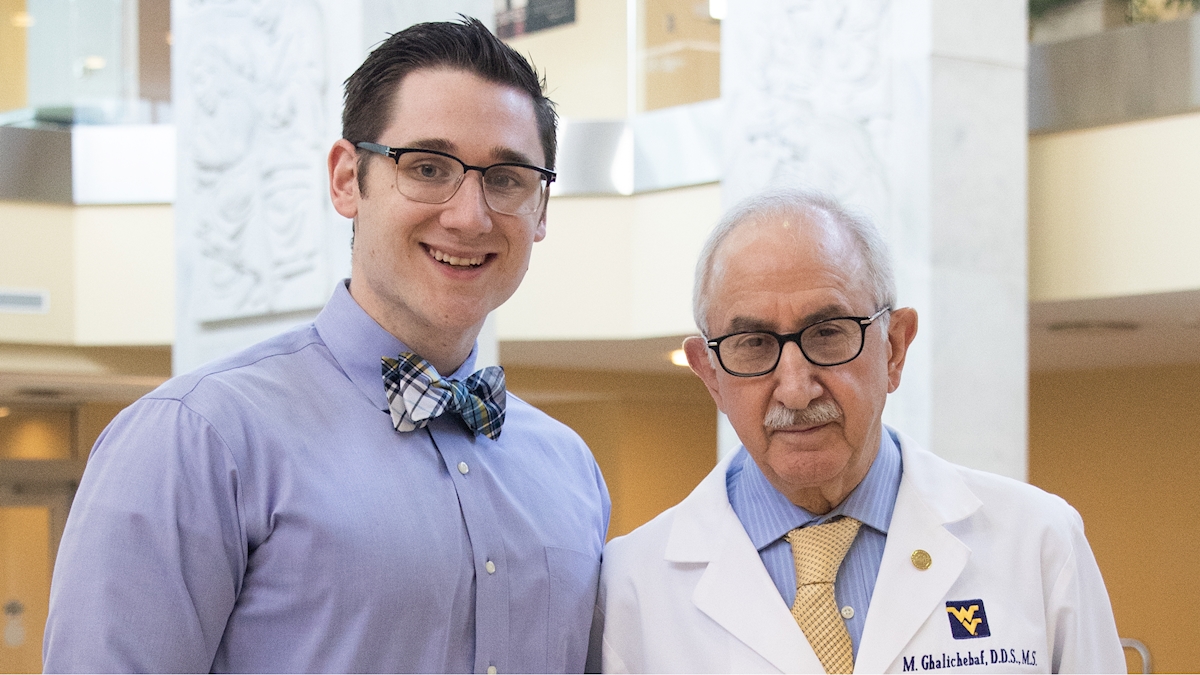 When West Virginia University School of Dentistry resident Dr. Matthew Harper says he does not care if his work goes unnoticed, he means it.

"Can I make an auricular prosthesis (an ear) look like a real ear? There is nothing I can do to make it look perfectly like the tissue a patient is born with. However, you can make them look very close to the point that it looks lifelike. Due to limitations in materials, there is only so much you can achieve,” Harper said.

The 2016 doctorate of dental surgery graduate completes a graduate degree and residency in prosthodontics at the dental school in May 2019.

His next move is to Rochester, Minnesota to attend the Mayo Clinic’s College of Medicine. Harper was accepted to the Maxillofacial Prosthetics and Dental Oncology Fellowship program in the medical school’s department of dental specialties. The ultimate goal is for Harper to return to the exact clinics and classrooms he has called his second home.

Harper naturally developed the skills and assets that are common to nearly all dentists. He was curious. He liked to work with his hands. He is creative.

“I think that’s a strength a lot of people in dental school have is they can observe, visualize and produce,” Harper said.

The difference for Harper is that he found himself in university labs and classrooms long before most of his colleagues. His father, Dr. George Harper, a restorative dentist and faculty member, has devoted more than four decades to WVU School of Dentistry. The younger Harper remembers plenty of summers on campus with his dad.

“Seeing the impact he made by not only treating patients but teaching individuals that went out and then treated patients, I saw how much he loved it and how much satisfaction it gave him to be in that position, so I started thinking about it.”

Familiarity drove Matt Harper’s own two-fold focus for the future.

“Coming into dental school I had the idea that I wanted to practice and teach dentistry. To me it was always a treat to meet someone who said, ‘Oh, I had your dad as a faculty member.’ That always brought me a lot of pride. I thought that is what I want going forward. It really intensified my desire to want to do that.”

Upon completing his dental degree at the School of Dentistry, Harper was drawn to prosthodontics. It is a specialized type of dentistry requiring a lot of vision.

You have to have “an ability to MacGyver, work on the fly and to create something without seeing it before,” he explained.

Harper has already fabricated uniquely designed prostheses. He recalled hinged dentures and stacked dentures for patients with limited ability to open their mouths due to medical conditions.

There are patients who require treatment for acquired and congenital defects, which require an additional level of training in maxillofacial prosthodontics.

For instance, maxillofacial prosthodontists treat cleft palate cases or people who have a damaged palate due to cancer resection or radiation.

“It seemed like a unique opportunity that fit my skills individually,” Harper said of a profession in oral and maxillofacial prosthetics.

Beyond face, mouth, jaw and neck treatment, maxillofacial prosthodontists can fabricate eyes, noses, ears and obturators that act as a patient’s palate.

“Maxillofacial is kind of taking it up a notch again (from prosthodontics) dealing with patients who have communications between their nasal passage and their mouth resulting in holes in the palate. These can be from holes drug use, from pathology or from congenital defect. Working closely with oral surgeons, physical therapists, speech pathologists and many other specialties, we are dealing with people who may need portions of their face, mandible or tongue removed for a host of reasons.”

There are currently only 238 active maxillofacial prosthodontists in the Academy of Maxillofacial Prosthetics in the United States. Only five programs in the nation graduate as few as 12 people a year with the specialized training.

First step to the future

In July 2019, Harper begins a one-year fellowship with Mayo’s Division of Oral and Maxillofacial Prosthetics.

While his father introduced him to restorative dentistry, another School of Dentistry faculty member influenced Harper to use his talents to treat some of the most challenging oral rehabilitation cases.

Harper was encouraged by, and worked closely with, his long-time friend and mentor Dr. Mohssen Ghalichebaf.

“He told me ‘The most important thing you can do for these patients, Matt, is to make them able to just go out and walk around in public without getting a second look,’” Harper recalled.

Sometimes that means providing treatment in dire circumstances. Radiation, for example, can destroy a patient’s soft palate. While fighting cancer, a person could also be struggling to eat, drink or speak.

“Treating patients with both intraoral and extraoral defects can be challenging. This challenge presents itself both physically and psychologically for the patient and the doctor. Everybody has the right to feel like and function like a normal person. I know I would not be able to do it without the support and sacrifice of my wife, Desiree, and the example laid out by the many mentors I have had.”

At 78 years old, Ghalichebaf is West Virginia’s only maxillofacial prosthodontist. He has treated patients and taught dental students for more than 40 years with the bulk of his career at WVU. His retirement is anticipated and there is currently no one who is qualified to replace him on the faculty at the dental school.

Under the leadership of dental school dean, Dr. Anthony ‘Tom’ Borgia, departments are beginning to consider succession plans for longtime faculty members. Support for Harper to attend Mayo Clinic has come from a faculty fund contributed to by loyal alumni.

With the rapid expansion of the WVU Cancer Institute, the School of Dentistry wants to continue to provide services for those individuals who have undergone radical cancer surgeries of the head and neck regions.

“This is a position where we can work hand-in-hand with ENT and the plastics department to harvest someone’s fibula and graft it to generate them a new mandible to place implants. So, functionally, they are very similar to before they had cancer. This was not able to be done until more recently, and it makes a patient’s journey back from cancer treatment, hopefully, more bearable,” Harper said.

Harper’s fellowship will be completed in July 2020. The road home will bring him back to WVU for a maxillofacial prosthetics career following the completion of his fellowship. “I feel like it’s something I can help people with and should. It means a great deal to me for Dr. Ghalichebaf to express his desire to have me carry on his legacy.” Harper is expected to return as faculty August 1, 2020.